TRIVAL is the first generation of renewably powered ship that can travel around the globe without any need to stop to port to refuel or to resupply.
We have envisioned TRIVAL as en scientific cruiser with speed of a yacht and utilization of research facility.
It is powered by wind and sun. TRIVAL power source consist of four VETROsails with total of ten VETAR 15 advanced wind turbines with joint power of 150 kW per hour. In addition to wind energy it has another 150 kW of solar power distributed throughout and at top of the ship.
With 30 MWh of power storage, 6000 kW propulsion system and maximum of 300 kW of power generation, TRIVAL can travel at speeds beyond 50 knots - well above any sail ship, or traverse distances around the globe well beyond any traditional fossil fuel powered sea vessel.

The purpose of TRIVAL is to be all around exploration ship that can travel around the globe collecting geological, biological, atmospheric and even historical data from above and below land and sea. It will be equipped with laboratories, hydroponic systems, water desalination and condensation machines, CNC machining systems, hi-powered computers and even a small smelting foundry.
It is meant to be a knowledge library so that in a time of need it may serve as a spark to reignite civilization development.

TRIVAL utilizes state of the art hybrid wind+sun renewable energy systems.
Wind energy is distributed through 4 retractable VETROsails where two central sails contain three VETAR 15 wind turbines each, while two lateral contain two VETAR 15 turbines each, in all totaling 150 kW of installed wind energy.
This is not possible by using conventional wind turbines of same power output as they are too large.
It is important to know that at the sea winds are much stronger and more sustained than winds at the land with global average wind velocity above ocean beeing around 8 m/s at 10 m height which is double of that on land.
Solar energy is implemented through efficient thin film solar panels that are lightweight and give better power production in shady and cloudy environment than traditional PV. Solar are mostly spread at the top of the ship to have the best exposure  from to sun. Due to small shadow from the VETROsails solar can be used jointly with wind turbines with negligible shadow impediment.
Expected wind/solar ratio in total power generation will depend very much of the weather and latitude but in general 75% of total power will come from wind turbines while the rest of 25% from solar panels. In average, joint power production will be at least 80kWh per hour or 2MWh daily.
In addition TRIVAL will have at least 30MWh of hybrid battery-hydrogen storage systems thus enabling it to travel 5 hours at maximum 93 km/h (50 knots) or to travel 8000 km at 18.5 km/h (10 knots) just on stored electricity. It will take 8-15 day, in average, to fully recharge the power storage while being anchored or in the full sailing mode at average 11 km/h (6 knots) velocity powered by 8 m/s wind pushing against the VETROsails.
TRIVAL geometry is that of trimaran that gives it unprecedented stability and safety at high seas as well as the most optimum configuration for achieving the highest velocity with minimum drag. With compartmentalized design, advanced material and added buoyancy it will be one the safest, fastest and most advanced ships ever designed.

One of the most important aspects of this project is tremendous benefit this project can bring to area of marine traffic and power supply.
TRIVAL offers the solution for a new type of marine passenger or cargo ship that could transform commercial marine transport by making it sustainable and cheaper.
In addition it would be possible to build renewable energy tankers that would transport electric energy or hydrogen instead of hydrocarbons.
Yes this ship is able to do that. 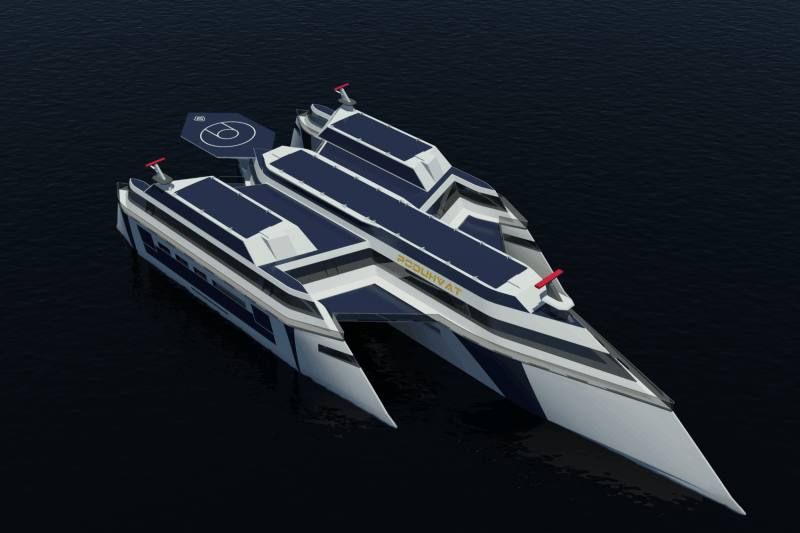 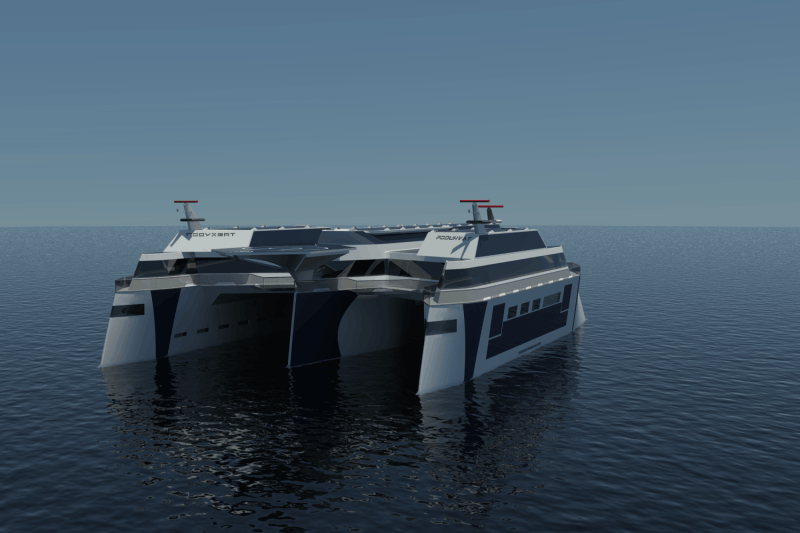 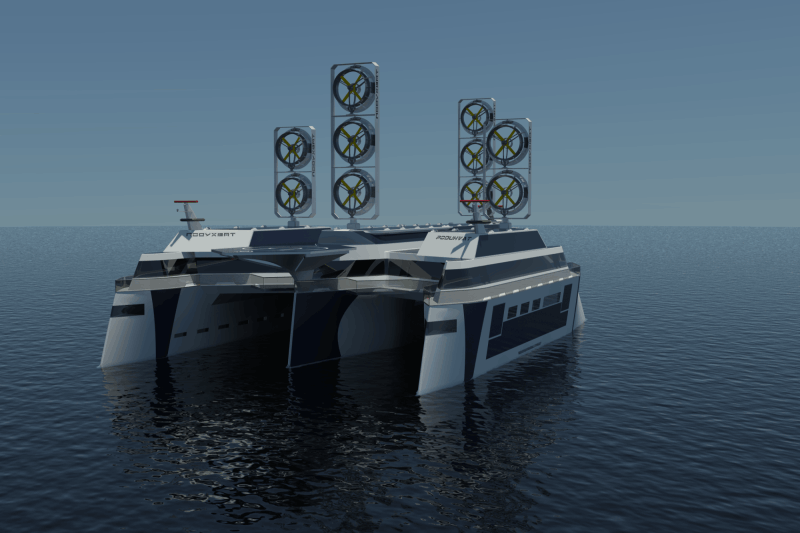 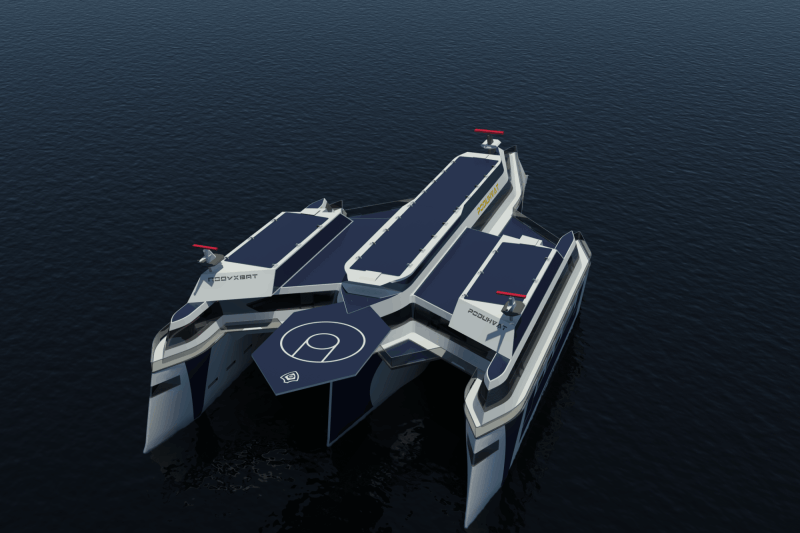 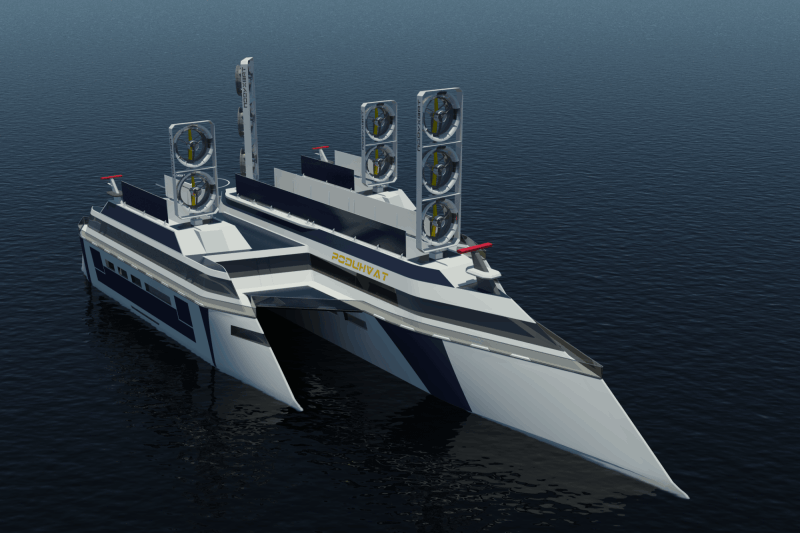 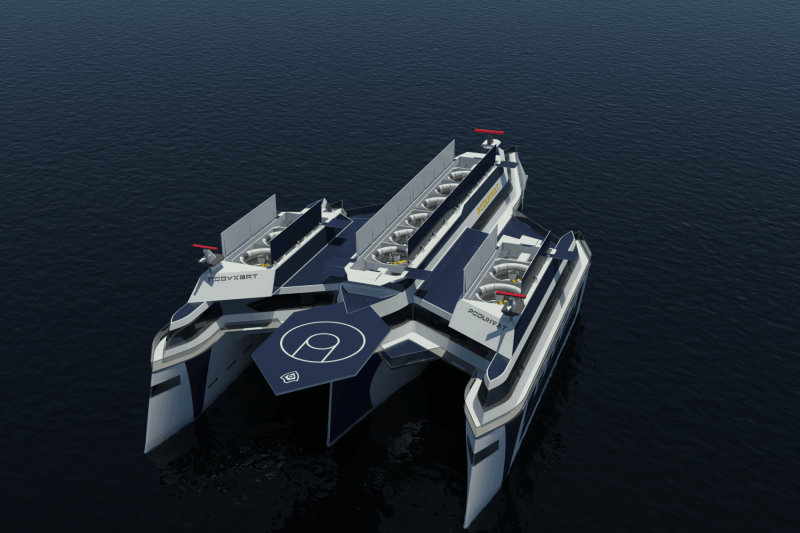 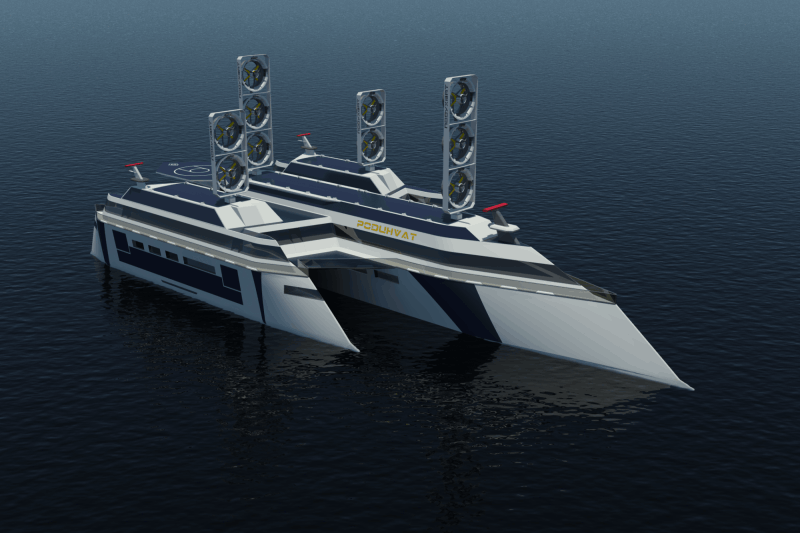 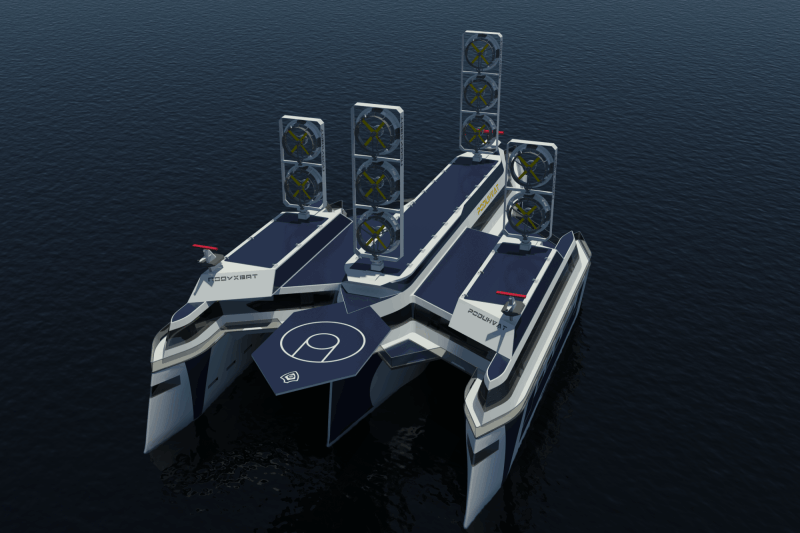 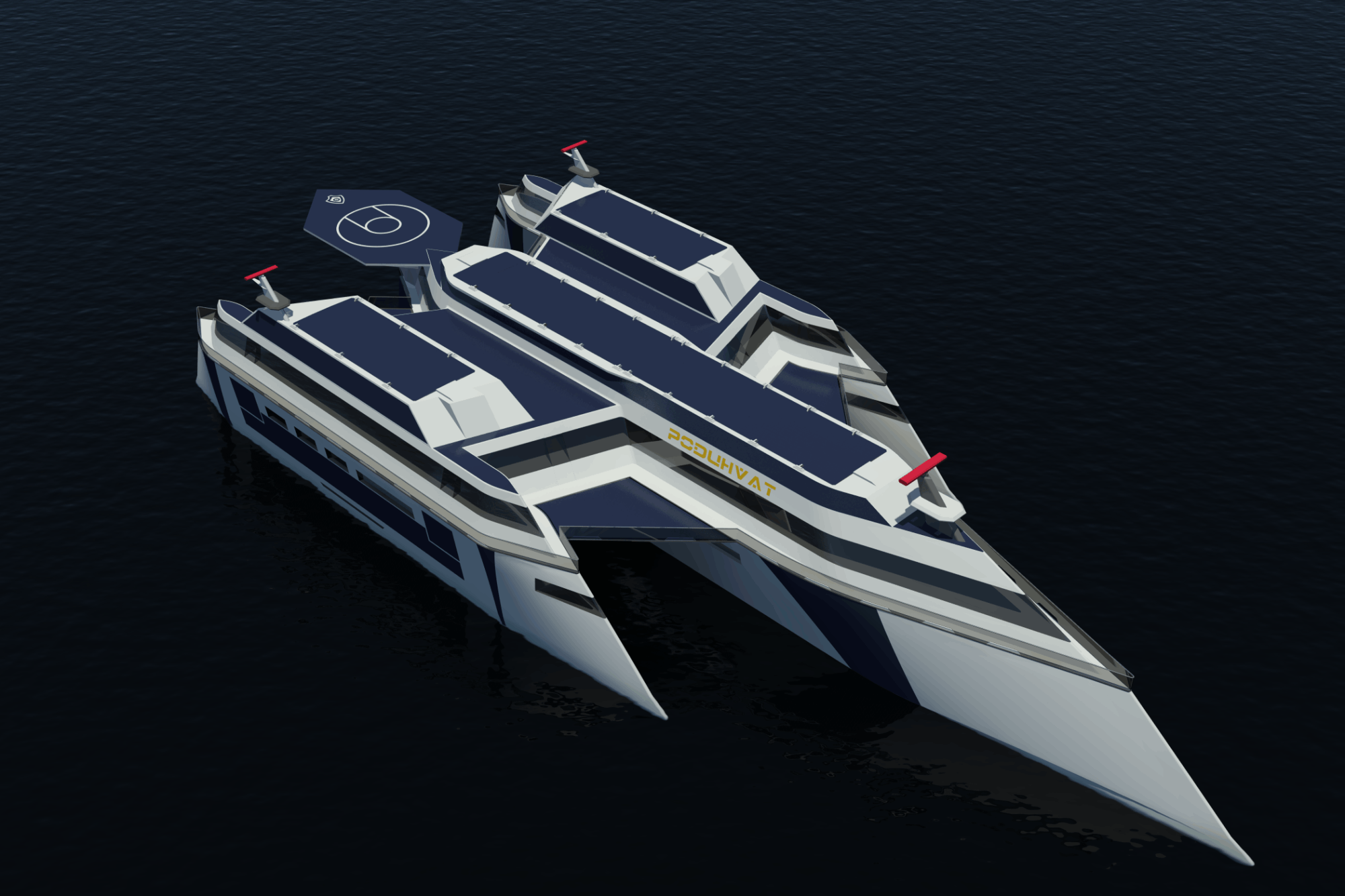 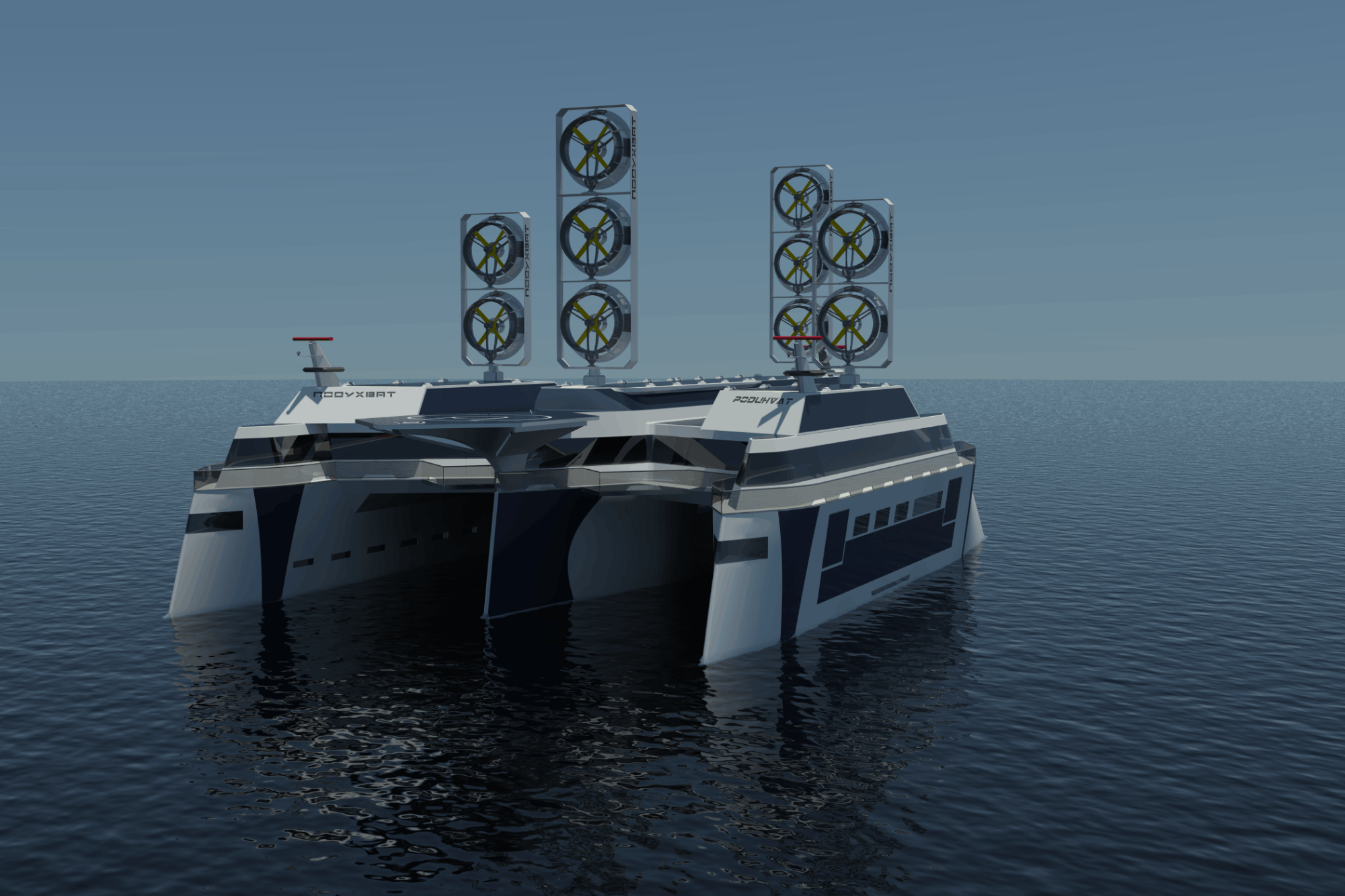 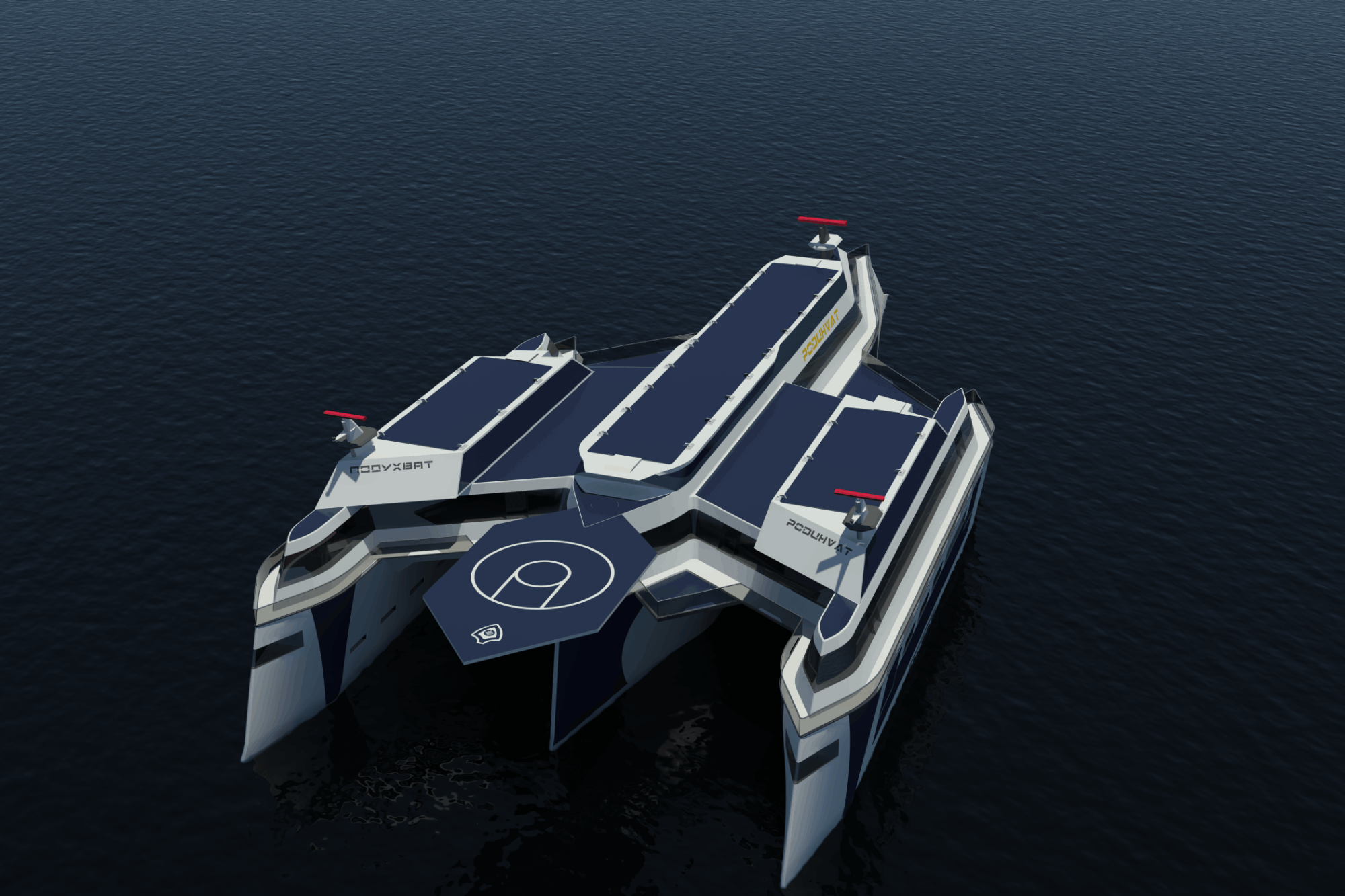 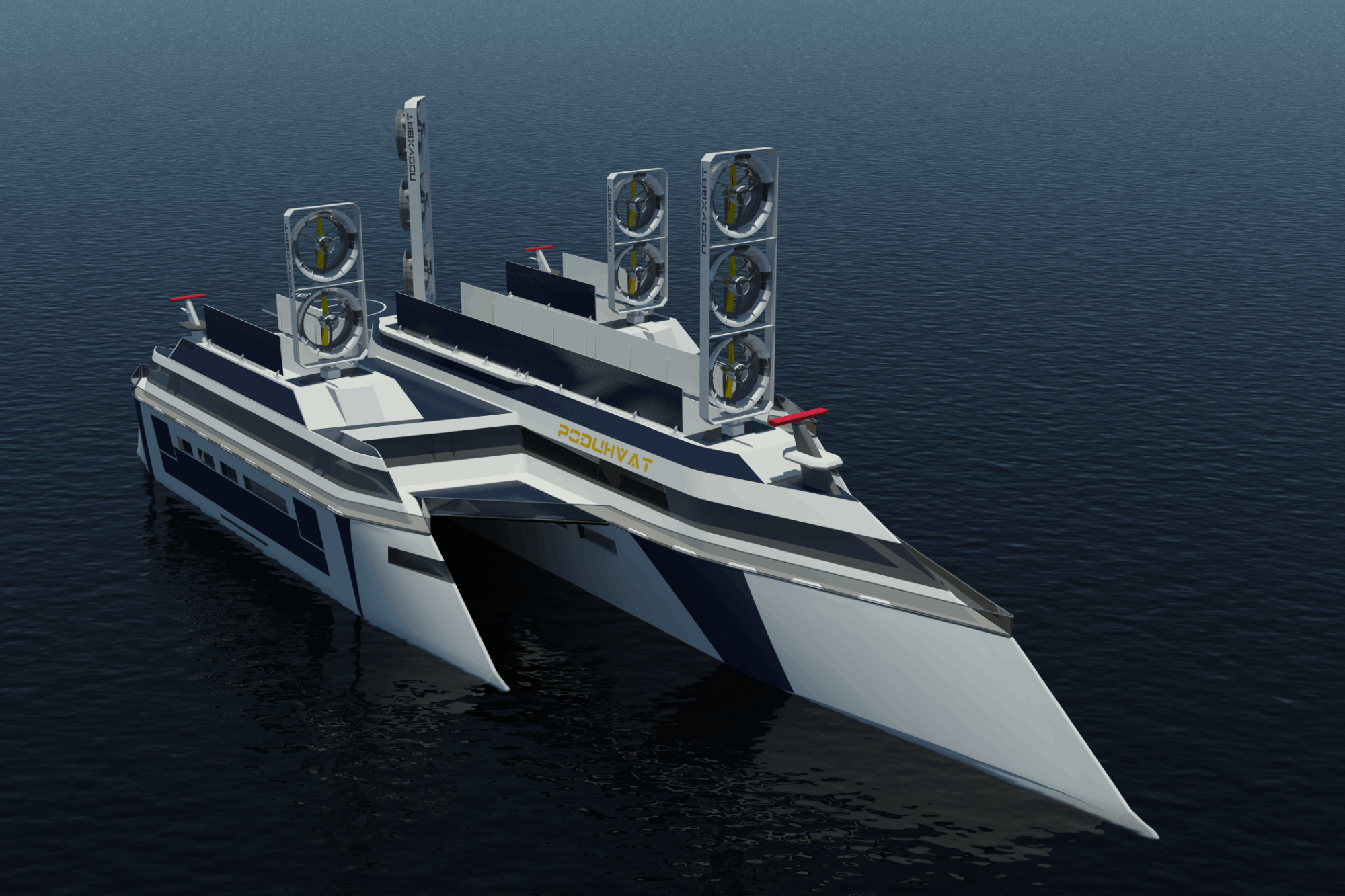 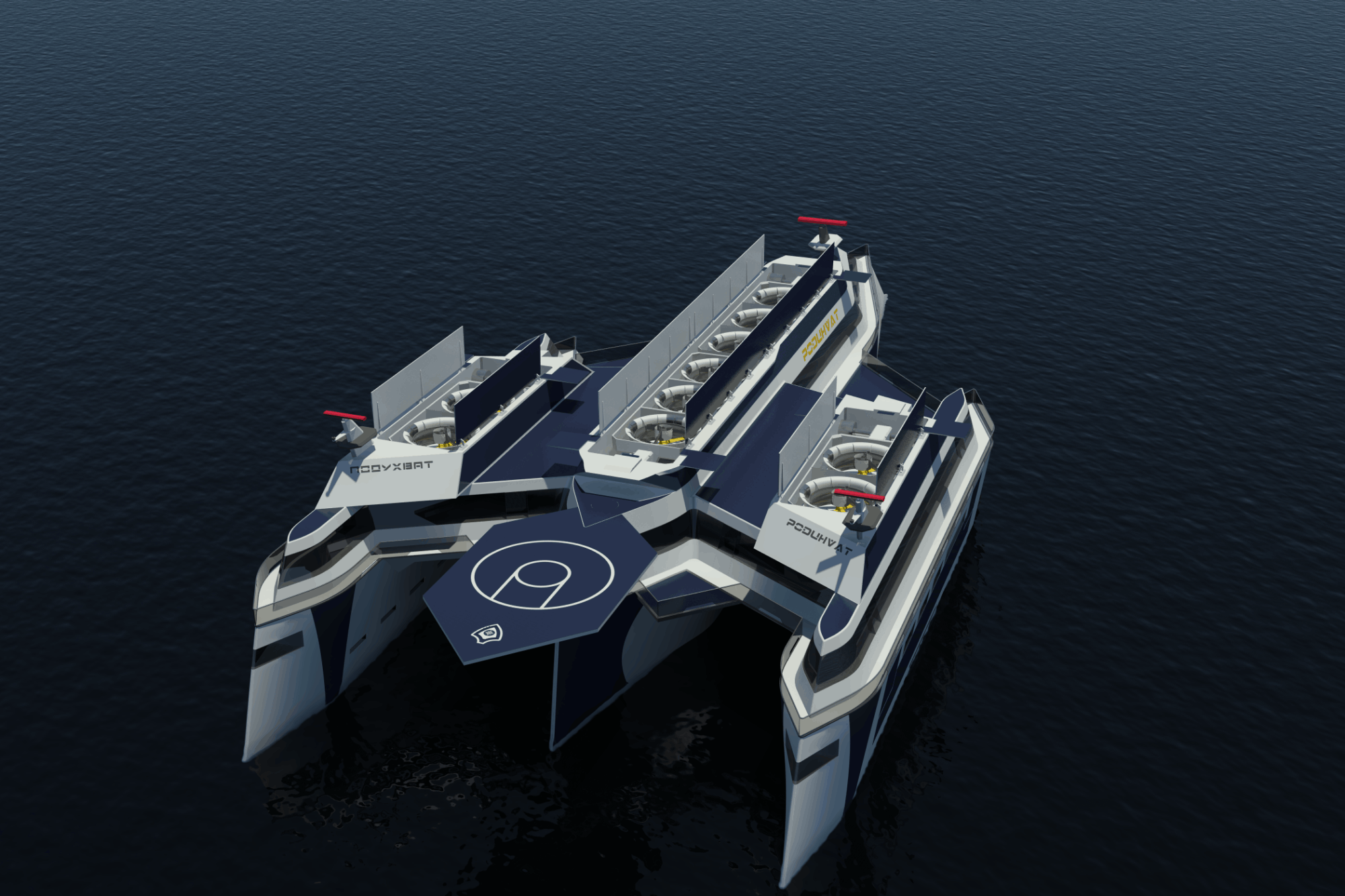 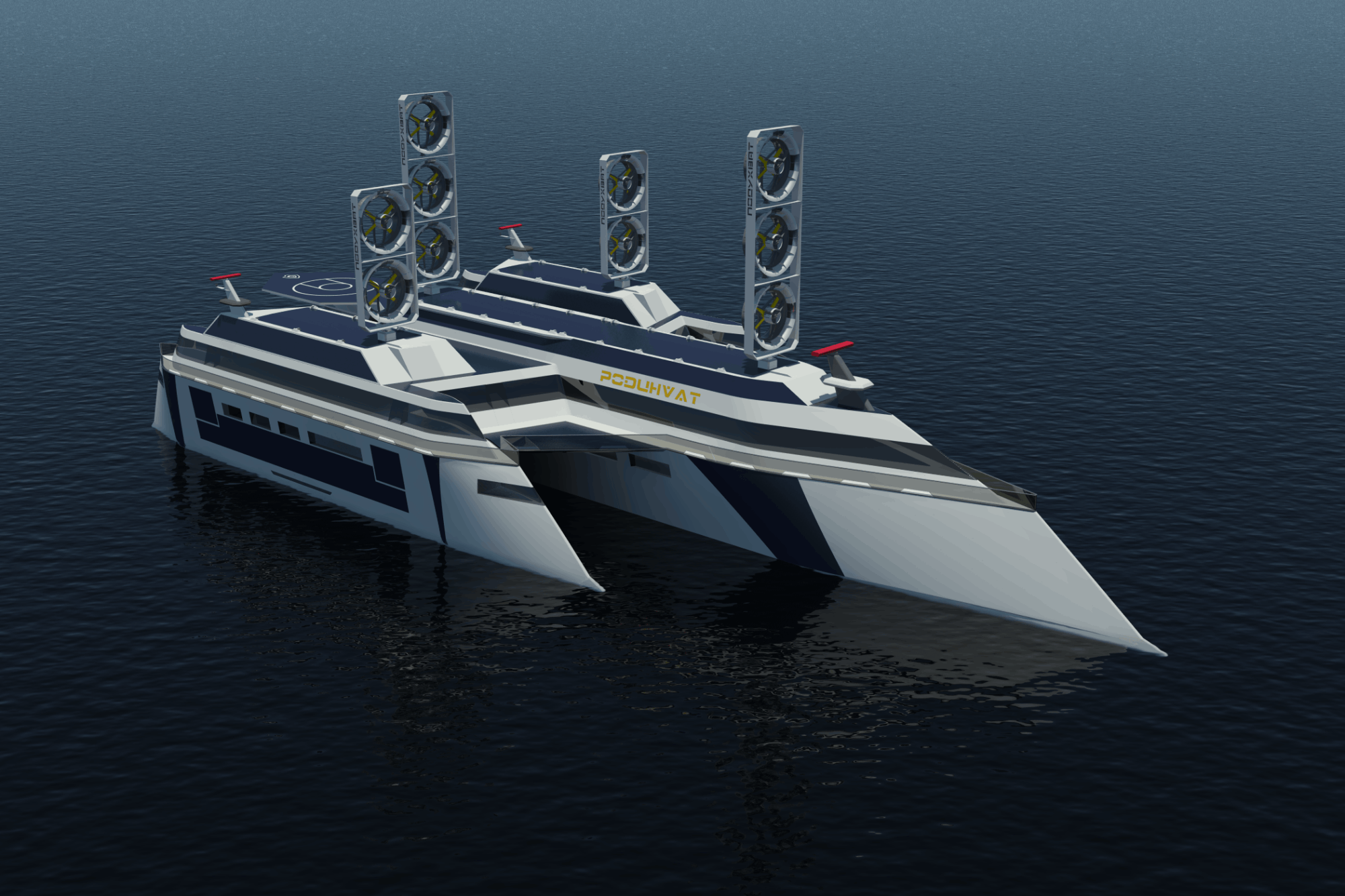 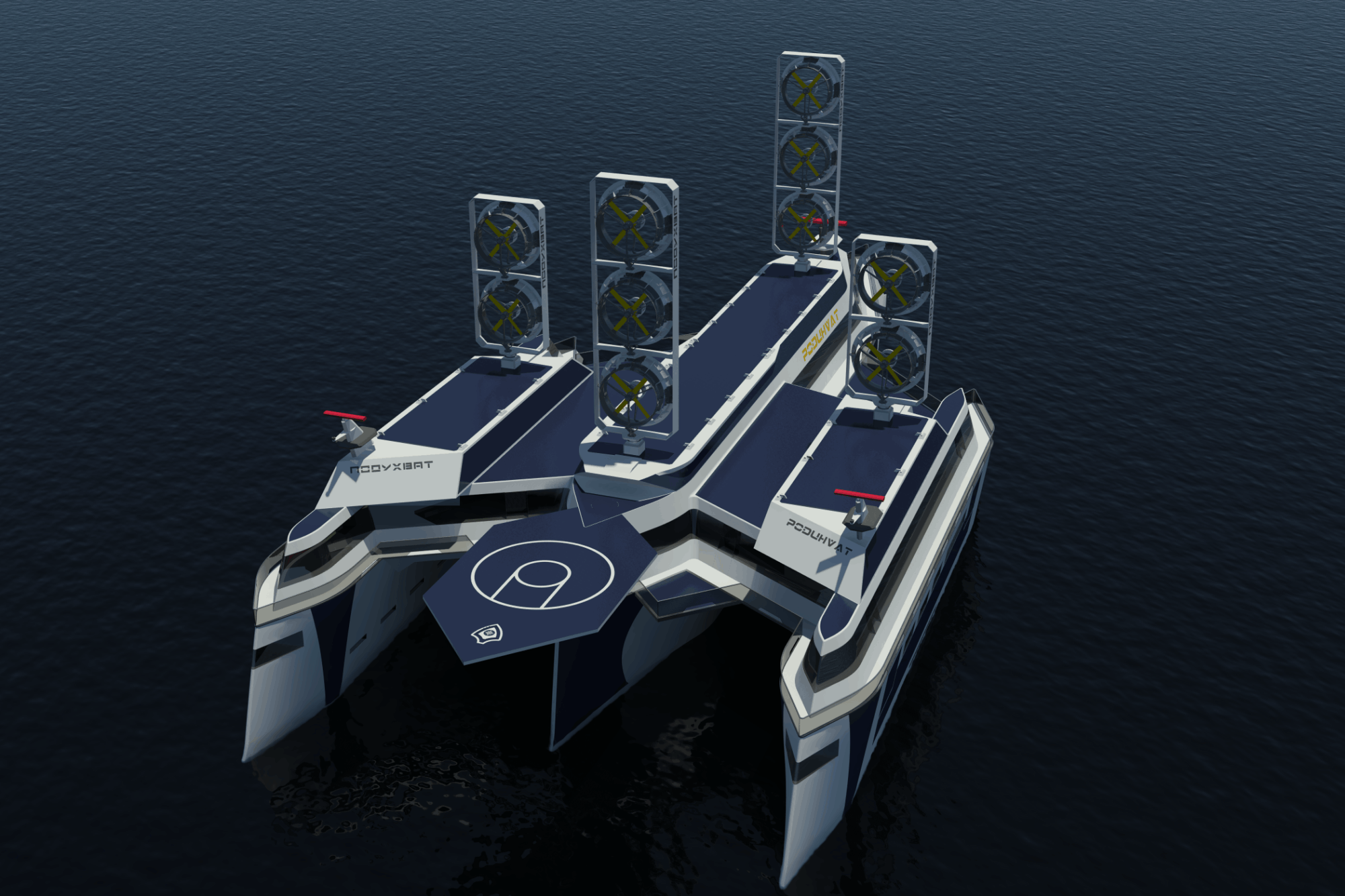 How far can you travel ?

The range of distances one could go with TRIVAL will depend of maximum power you are using to travel. The more engine power you use the faster you will go but at shorter distances. If you go slower with less of engine power and you are able to equalize power production with engaged engine power you can travel with unlimited range.

Hourly electric power production is calculated at 30% of power capacity or 90 kWh. Depending on weather conditions i.e. wind velocity and solar insolation these values can change.

Become a part of this journey.